I finally got around to working on my lab and getting the latest and greatest installed. The first order of business was to get current on Exchange and decommission both Exchange Server 2010 and 2013. Both of these uninstalled without a hitch.

After all the configurations were done it was time for a little clean up (mostly because I am a little neurotic with things like that). Namely getting rid of the first default database. No problem right? Well I hit a road block almost immediately after moving the archive and arbitration mailboxes getting the following error. 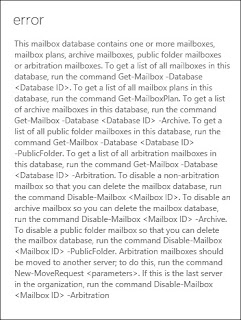 Now I will admit it didn't take long to find the solution but I did have to dig a little. Not having done 2016 up till this point and not reading too much on it (my own fault I know) I discovered one of the new items within 2016 is the Mailbox Audit logging mailbox. While this has been around since Exchange Server 2010 it was not contained in a system mailbox by default. More information can be found in the Exchange Server 2016 Technet article.

So running the Get Mailbox -Database "Default DB name" -auditlog | FL name,alias,servername,database command I was finally able to see where the problem was in deleting the mailbox database as can be seen in the following graphic.

Next up now was simply to move this last mailbox. This can be done with Get Mailbox -Database "Default DB name" -auditlog | New-MoveRequest -TargetDatabse "Database Name", once this was initiated I monitored the move request, with Get-MoveRequest and upon completion I removed the move request and was able to delete the mailbox.

Hopefully this will help someone trying to remove the default database.

P.S. As a side note rather than removing the database entirely it can be re-named and the path can be moved as well. This may be preferable for some administrators. Once the Database is re-named within the EAC, dis-mount the database and from the EMS run the following. Move-DatabasePath -Identity "DatabaseName" -EdbFilePath "path\DBname.edb" -LogFolderpath "path\logfolder"

What will Microsoft Professionals aspire to now?

Microsoft on Friday August 30 2013 announced that it would be retiring the MCM, MCA and the MCSM programs. What the???  While I am not an MCM obtaining the MCM or MCSM for Exchange and/or Lync has been a long time goal for me as I am sure it has been for many other professionals out there. A copy of the email that was sent out announcing the retirement of these prestigious certifications can be found on Neil Johnson's Technet Blog.

What will the elite certification be now? Will MS try to revamp this or is this a sign of the movement to a devices/services organization that Microsoft is aspiring to be and will not require such elite professionals in the community?  An open plea so to speak has been posted on the Microsoft Connect site by Jen Stirrup asking Microsoft not to get rid of these programs. The comments on this post are a definite indication that these are still a valued commodity.

In a reply to the plea and comments on the Microsoft Connect site Tim Sneath from Microsoft states that this was a long hard decision that took months to make, they evaluated things like how many people are certified, what is the recognition for these certs and the availability (US English only) and it came down to a simple fact that while it was a successful program for those that were in it the program itself was not enough. Tim went on to Further say that this is not a complete cancellation of an elite certification but a 'pause' to come up with something better. With the further explanation it does not sound as hopeless as the original letter t the current MCMs but you would think that it would have been phrased this way from the beginning not as an after thought after all the backlash.

I for one am hoping that in the wake of this announcement and the community uproar that Microsoft will be announcing (sooner rather than later) a new set of certifications or something along the lines of better that were so cryptically eluded to. Till then I will continue in my path to be better at what I do.
Posted by Mrjhide at 3:00 PM No comments: